The past few weeks have really flown by! I mean, how do we only have THREE days left in July?!

Here's a quick round up of some of the crafts Marshall has been making.  Two of his favorite things are paint and glue, so I try to include at least one of the two in every craft we do!

Baseball is a big topic of conversation in our house and 9 times out of 10, Marshall just wants to throw the ball up in the air and catch it with his glove.  He has gotten REALLY good at it!  So of course, I had to find a baseball craft for him.  This was really simple to do, but he absolutely loved it! 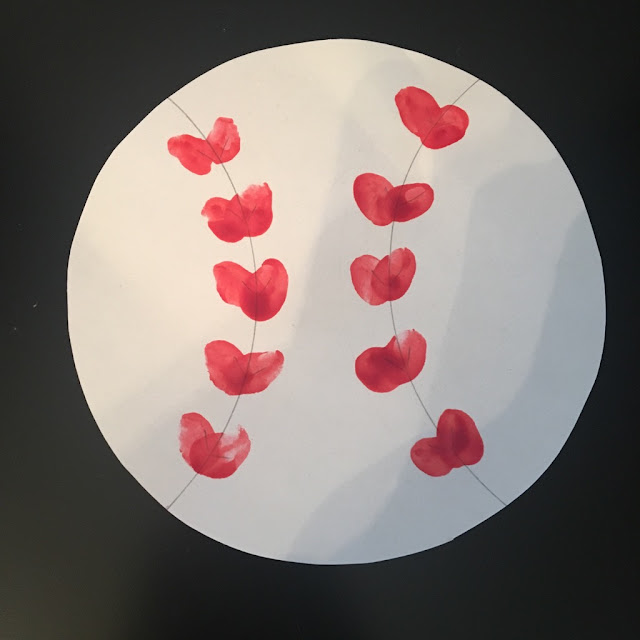 Marshall has also been on a Christmas kick lately, and NOT by any influence from me! 😂
It randomly started when he kept asking to watch Charlie Brown "Chris-Chris" every morning when he woke up, and even brought a Christmas book downstairs for me to read first thing.  Since then, we've watched several more Christmas movies, and I have no problem with that at all! 😉 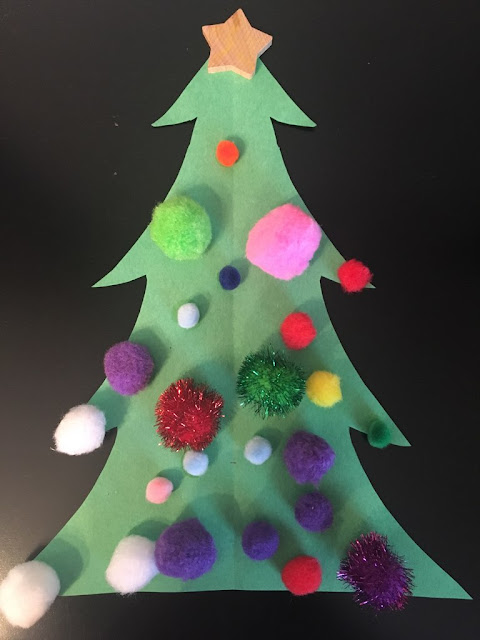 We also made foam and popsicle stick Popsicles! When I kept telling him we were going to make popsicles, of course he was confused when I had to tell him we couldn't eat them. lol. 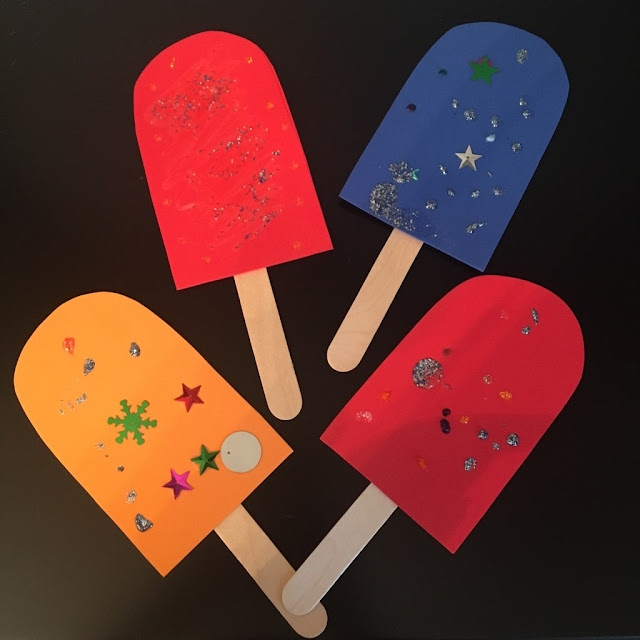 This was SUCH a fun and easy activity that Marshall loved way more than I thought.  I wrote out several of these sheets with numbers and letters for him to trace with Q-tips and paint, and he FLEW through them and kept asking me for more.  Not even joking, we probably ended up with at least 20 sheets of tracing that he did and loved so much! We will definitely be doing this again! 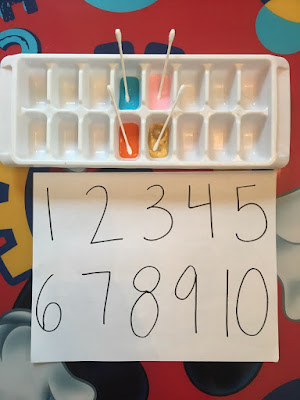 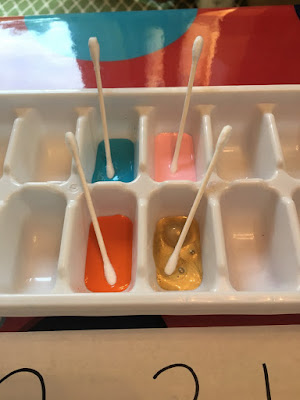 Finally, he asked me several times to do a shark craft, so I headed straight to Pinterest.  Marshall was eager to look, too, so he sat down beside me as I scrolled through "shark crafts for toddlers" and this was the one he chose! Coincidentally, we made it after reading Clark the Shark! 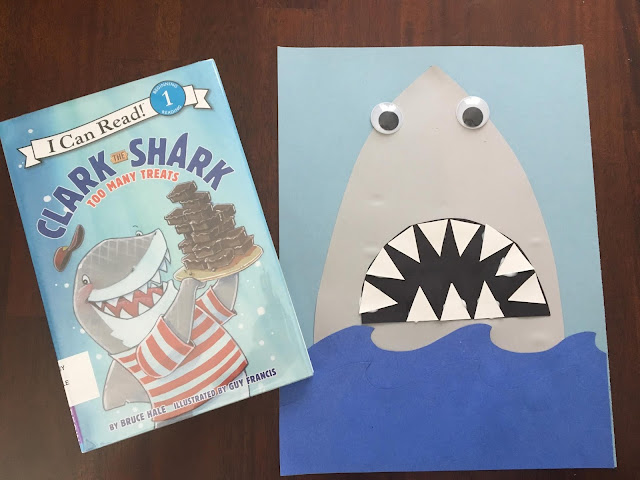 Posted by Mallory Nolte at 5:00 PM No comments:

This week, we did a different patriotic craft or activity every day, and even did the last one at the river yesterday!

We started off by painting some fun fireworks on Monday.  Super easy instructions here. 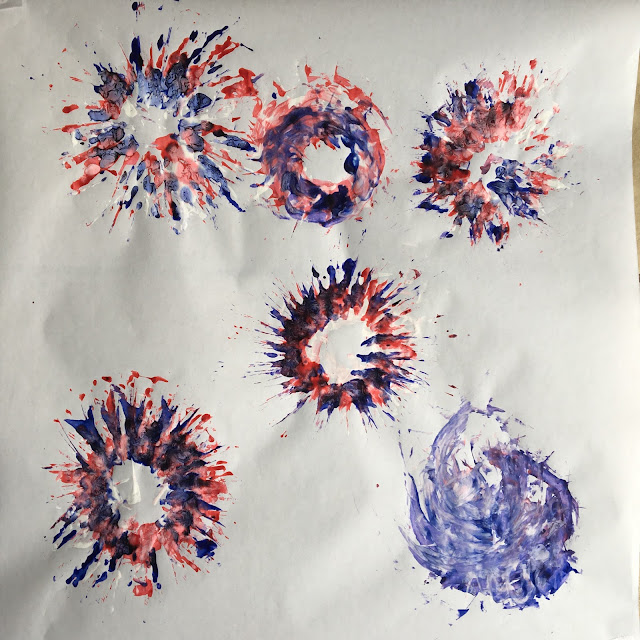 On Tuesday, Marshall loved making this hand print and fingerprint flag.
He calls his hand prints "high fives" and I love it 😊 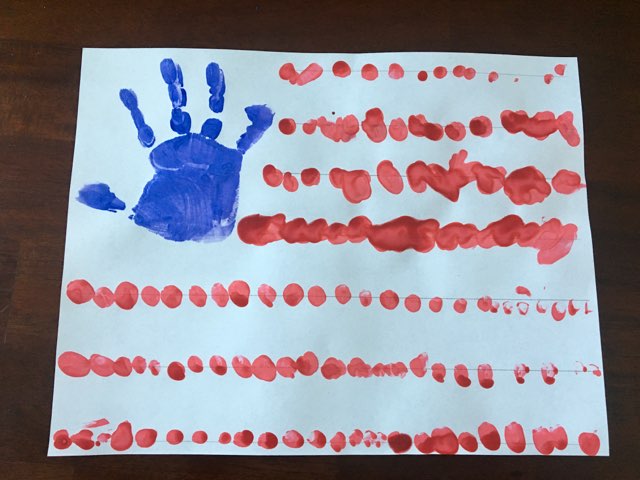 On Wednesday, we did a counting worksheet and some coloring pages.
On the worksheet, I told Marshall to write his name on top of this line. He took what I said way too literally. 😂😂 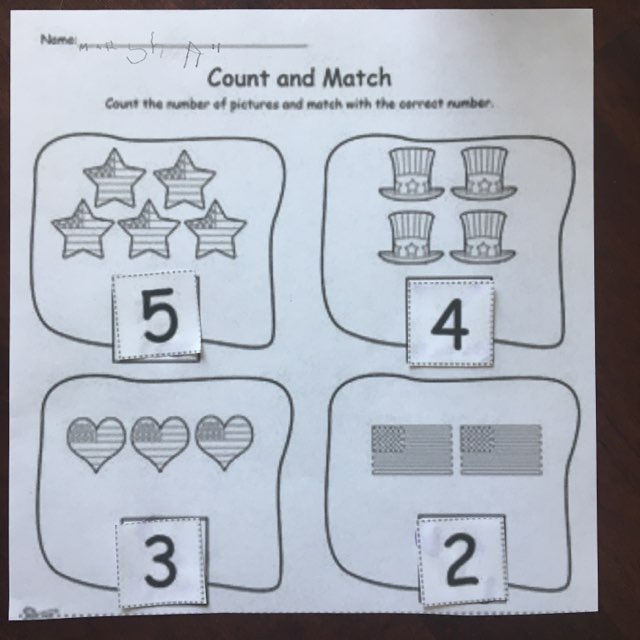 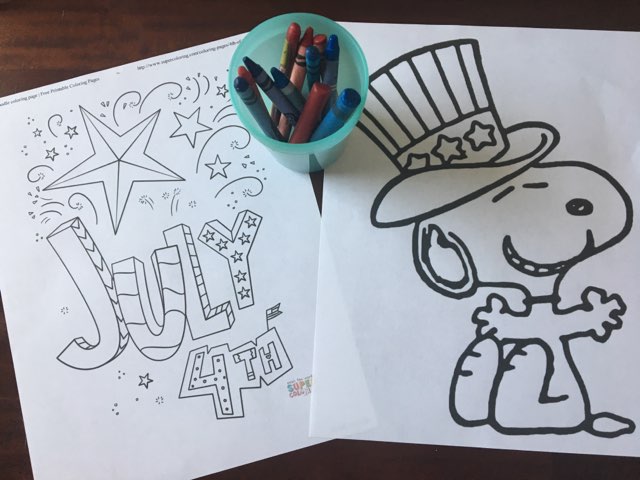 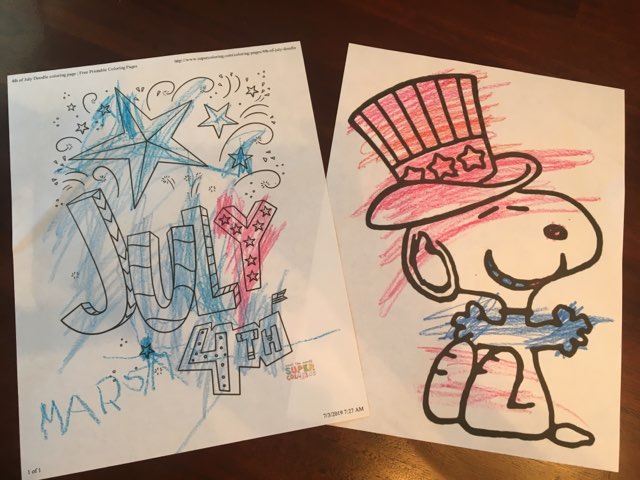 At the river yesterday, Marshall made a necklace out of dried pasta noodles that I dyed red and blue.  Although, Marshall didn't hesitate at all to tell me they were more green than blue. haha
Yes, Marshall. No matter how much blue dye I kept adding, they still had a greenish tint. 😂 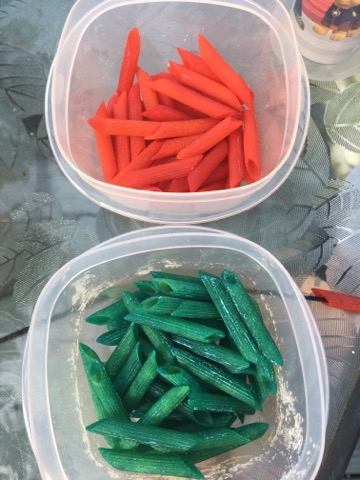 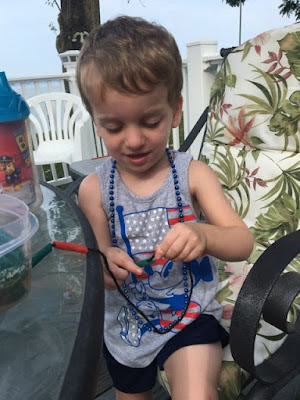 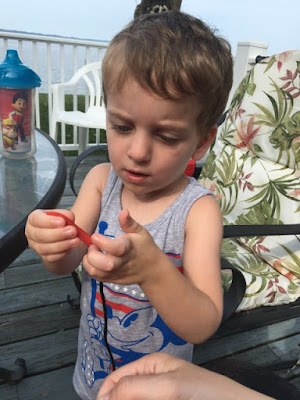 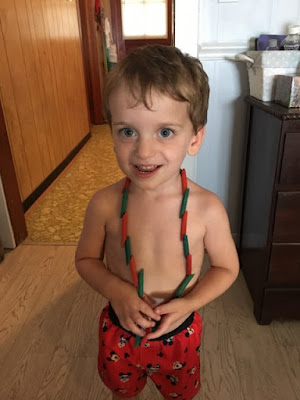 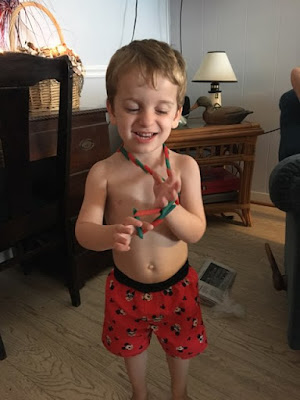 Hope you all had a fun Fourth of July!
Posted by Mallory Nolte at 8:15 AM No comments:

Initially, my plan for this activity was to have Marshall thread beads onto pipe cleaners, but I'm pretty sure that lasted less than 60 seconds.  As we were picking through the beads to take out the ones that were too small for the pipe cleaner, another idea popped into my head that I knew he'd love: sorting.  I grabbed the ice cube trays I bought (same ones we used for the ice painting), showed him how to do the first few, and he picked up on the idea very quickly.

He sorted most of the beads by type, and some by color, and then I think we ended up with a couple bins of "this is the only bead we have of this type, so it belongs with the other misfits." 😂 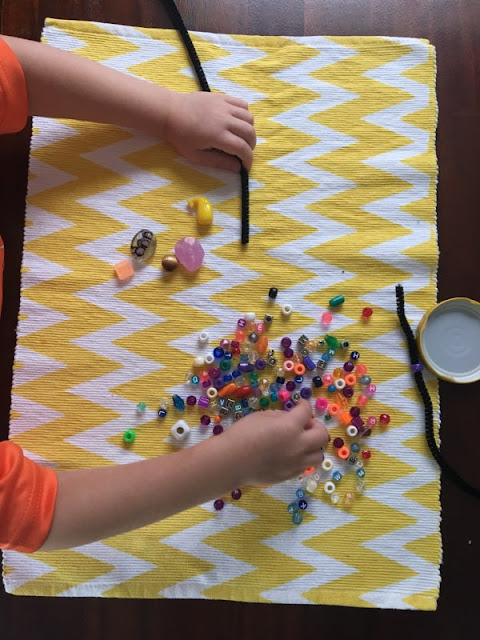 Marshall LOVES learning to spell right now, so he was excited about all the letter beads I had. 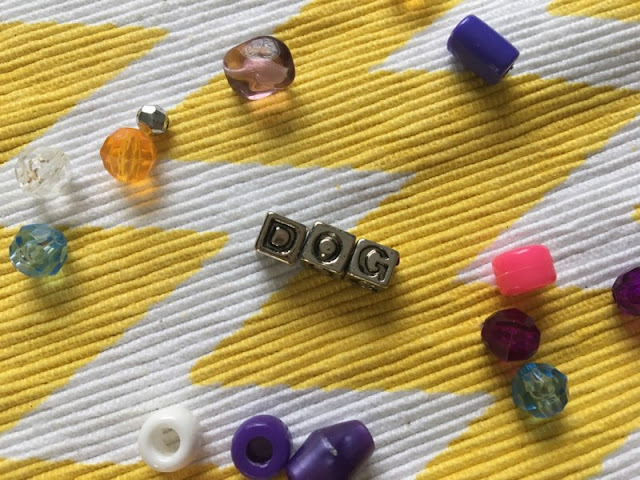 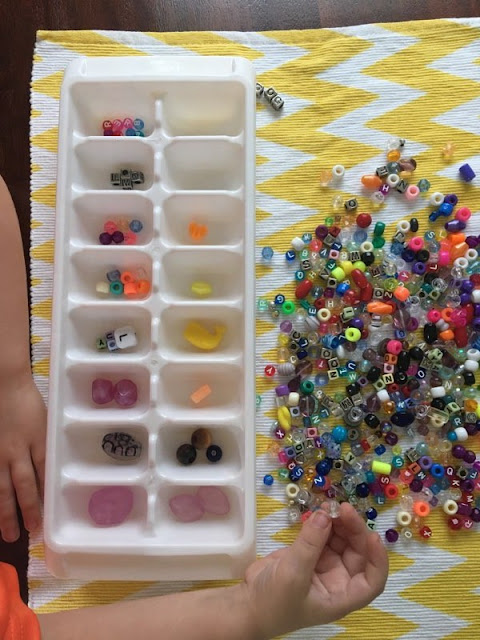 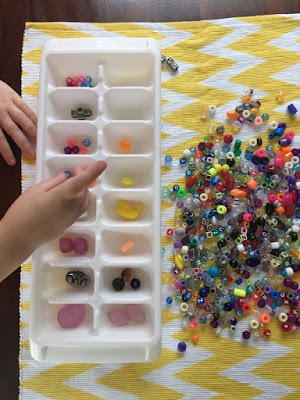 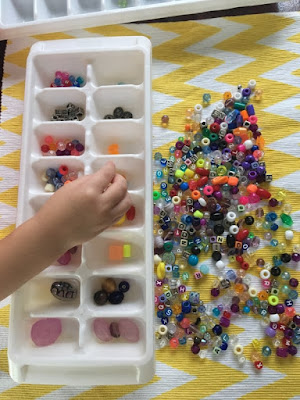 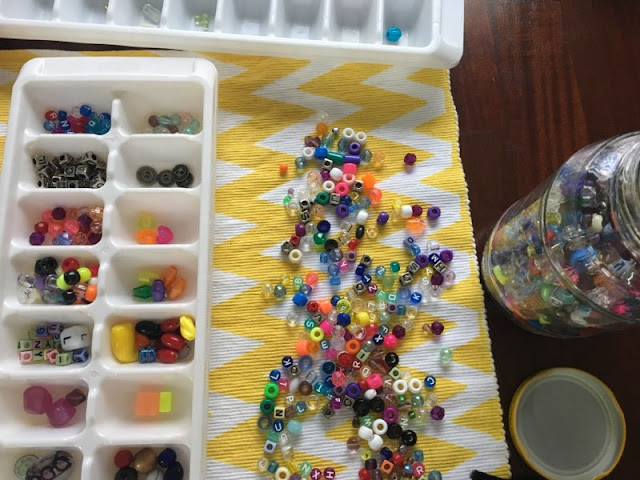 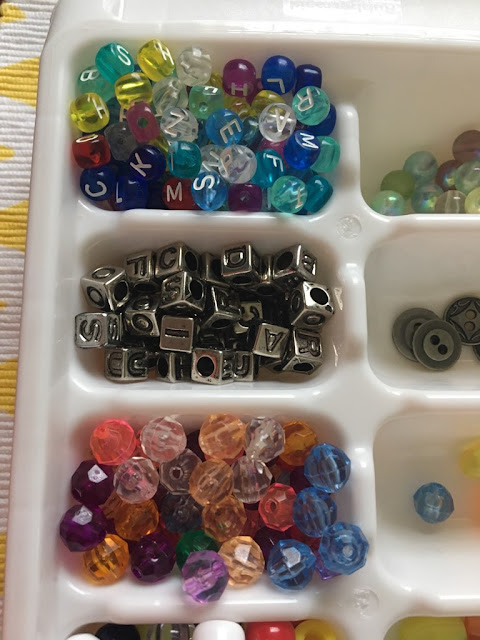 I knew I saved all those miscellaneous beads for a reason 😉
Posted by Mallory Nolte at 7:11 AM No comments: 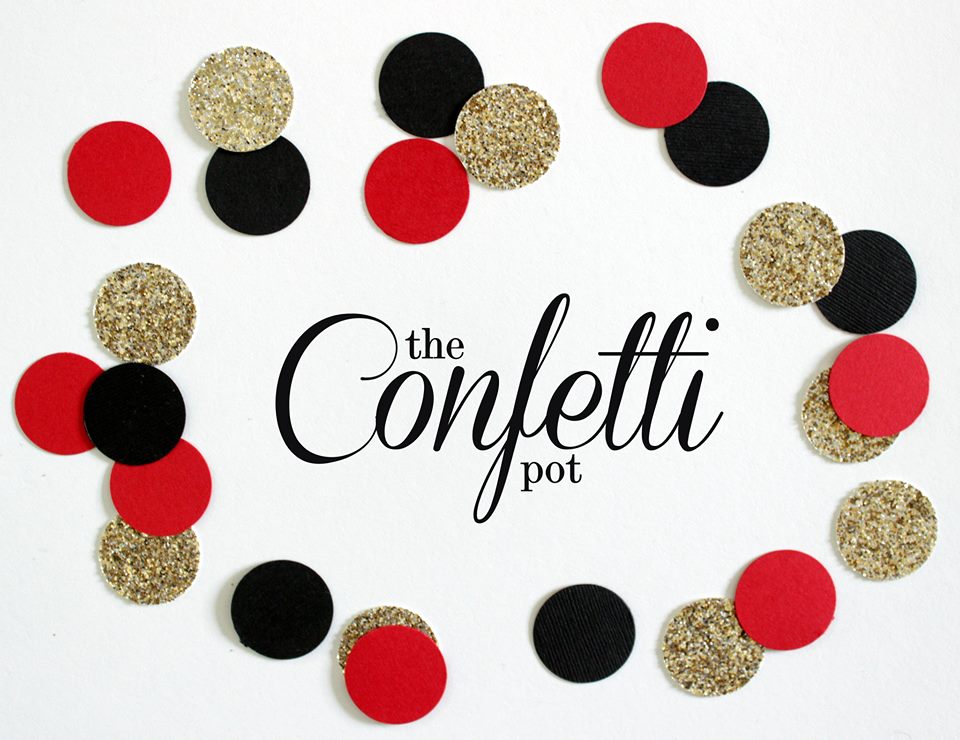